The Midwest Center for Investigative Reporting relocated to Champaign, Illinois, in 2012 to turn its investigative lens to one focus — agribusiness and its related issues.

Below are five ways we’ve done that. If you like what you read, then please donate today to support our nonprofit, non-partisan journalism.

Your donation in any amount is appreciated. 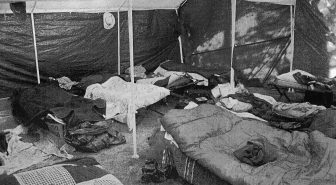 A photo from a 2015 lawsuit related to H-2A farmworker housing in Texas. In a complaint, a farmworker alleged that he “had to cook over a fire on the ground” and at times “sleep in an open-air shack or in a pick-up truck” because proper housing was not provided. Housing is a requirement under the federal H-2A program.

In 2014, the Midwest Center for Investigative Reporting began exploring the conditions of the temporary housing that migrant farmworkers live in while working in America’s fields.

Migrant farmworkers help plant, pick and process the fruits and vegetables that make their way into consumer households. Their work is so vital to the U.S. agribusiness industry that it is nearly impossible to name a food product sold at local grocery stores that did not first pass through a migrant worker’s hands.

Indeed, an ongoing investigation by the Midwest Center for Investigative Reporting has found that chronically poor living conditions persist because the government agencies responsible for enforcing housing standards are often overwhelmed by workload or rendered ineffective by inadequate budgets and toothless policies. Abusive housing practices of both multi-billion dollar agribusiness corporations and small-scale growers continue to flourish as a result. And migrant farmworkers season after season are left to live in rundown apartments, ramshackle trailers and converted motels.

Our ongoing investigation continues with the first-ever national database of housing inspections, released in 2016. 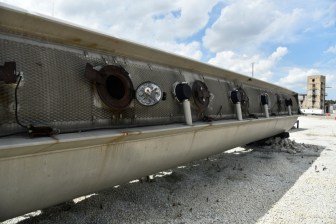 A tanker at the Fire Service Institute on Wednesday, Sept. 7, 2016.

An ethanol spill occurs every two days on average in the Midwest, the worst of which result in contamination of water supplies, major fish kills, loss of life and millions of dollars of damage.

The Midwest Center for Investigative Reporting found that as production and transportation of ethanol has risen dramatically in the region over the past three decades, so have ethanol spills.

The Midwest Center for Investigative Reporting focused on spills involving fuel ethanol containing 5 percent or less gasoline, not the type of ethanol that can be used in standard or flex fuel cars. The vast majority of ethanol is transported in this potent form from producers to fuel blending terminals, where it will be further diluted with gasoline and sold for its common use.

These spills are different than other hazardous materials spills, which garner more media attention. For example, pure ethanol fires are initially invisible, until other materials are caught on fire, and cannot be put out with water. Instead they require a special type of firefighting foam, which isn’t always a quick fix. 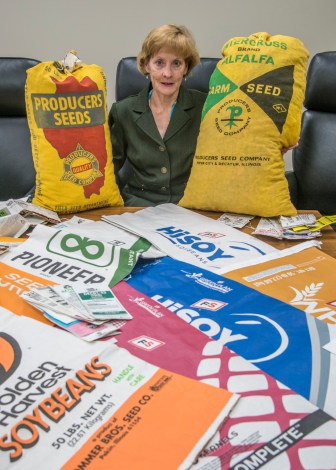 Tamara Nelsen at Illinois Farm Bureau in Bloomington with a variety of seed bags from the past. Wednesday, Oct. 5, 2016.

Seed companies sell varieties of seeds with traits that help farmers withstand drought or ward of crop-destroying pests such as weeds and insects. To create those traits, companies use a mix of traditional breeding methods and genetic engineering techniques. Seeds produced with genetic engineering are commonly known as genetically modified organisms, or GMOs.

Agribusiness powerhouses have gobbled up hundreds of small-scale seed companies since 1990, research from Texas A&M University’s Agricultural and Food Policy Center reveals. Those buyouts have left just a few dozen independent sellers remaining. The vast majority of the corn seed market is dominated by four companies: Monsanto, DuPont, Dow Chemical and Syngenta AG. The same four companies control most of the soybean seed market as well.

Critics believe the acute concentration of seed companies has generated an uncompetitive market that has hurt farmers by raising the price of seeds as commodity prices have dropped. Farmer profit is so weak that the U.S. Department of Agriculture announced in early October that it plans to pay more than $7 billion in taxpayer money to keep growers in business.

A central Illinois farmer harvests corn toward the end of the 2016 harvest season. As of Oct. 25, the price of corn was about $3.50 per bushel.

The Trans-Pacific Partnership could mean stability for the U.S. ag market

In 2015, when the U.S. first signed on to the Trans-Pacific Partnership, we explored what the trade agreement could mean to the agribusiness industry.

While the incoming president elect said he would pull out of the deal, the TPP meant big opportunities for ag.

The Trans-Pacific Partnership – and free trade agreements as a whole – can help reduce wild swings in trade from year to year by encouraging political and economic stability, according to Henry Nau, a professor at George Washington University’s Elliott School of International Affairs and former senior staffer on Ronald Reagan’s National Security Council.
“The open, free-trade market system that we’ve had is the right one,” said Nau, who has also worked in the State Department. “We’ve been incredibly successful for 70 years now in, you know, creating an open, competitive, peaceful world economy that has incorporated more and more countries that are doing well and that are satisfied.” 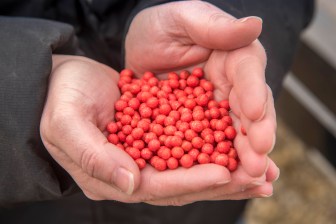 Months before Monsanto released its latest GMO corn and cotton seeds, the Midwest Center for Investigative Reporting explored the impact of what the company called its largest biotech release in history.

To counter a “super weed” epidemic plaguing farmers, agribusiness giant Monsanto is steadily moving forward on the introduction of its next major wave of genetically engineered crops.

But – citing environmental and sustainability concerns – critics argue that step forward is actually a substantial leap back.

Similar to bacteria that have adapted to frequently used antibiotics over time, super weeds have gained immunity to herbicides. Weed scientists estimate there are more than 400 different herbicide-resistant weeds around the world. Resistant weeds hurt crops by competing for sunlight and nutrients.